Posted on March 22, 2011 by Epicurious Travelers

Note to self: New Haven is a long way to go for dinner.

But the occasion was my Dad’s 85th birthday, which in New Haven-speak, ain’t chump change. After plotting with my co-conspirator, Jacob, we agreed on Union League Café, a lovely, old-fashioned “club” on Chapel Street with a sophisticated vibe and impeccable service. 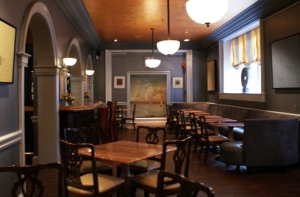 The surprise went off without a hitch. Surprises are overrated about 88% of the time, but for whatever reason, this one worked. We relaxed and recovered in the main dining room in the dappled light of antique stained glass. The restaurant is French – not ooh-la-la French, more French style – so we indulged in classic steak frites and asparagus. Sauces arrive in their own little boats – Hollandaise for the asparagus and Bearnaise for the steak, nicely flavored with tarragon. Lovely.

We lingered over signature marmalade crepes with candles and “Happy Birthday” written with chocolate in someone’s scrolly hand. New Haven is a long way to go for dinner, but love sometimes involves a bit of travel, no?

“There’s something like a line of gold thread running through a man’s words when he talks to his daughter, and gradually over the years it gets to be long enough for you to pick up in your hands and weave into a cloth that feels like love itself.” – John Gregory Brown

P.S. Rushed for the late train to Boston and awakened daughter Jess in the North End after midnight, ringing her doorbell – payback is so satisfying. Discovered that Café Nuovo on Salem St. has spaghetti carbonara on their breakfast menu, and the rich taste of Rome powered me back to Portland the next morning, fully recharged. Huge thanks to Chris without whom I couldn’t have managed any of it, period.