Posted on February 23, 2018 by Epicurious Travelers 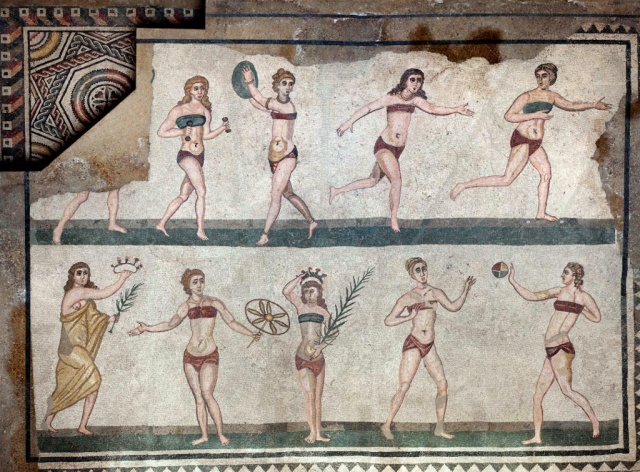 In case you think all we do here is eat and drink, you are only half right. Here are images from a day among the astonishing mosaics in the Villa Romana del Casale, in the very small town of Piazza Armerina. My favorite is the Palestrite Room’s “Bikini Girls” who add uncanny perspective to our ongoing international infatuation with sport. 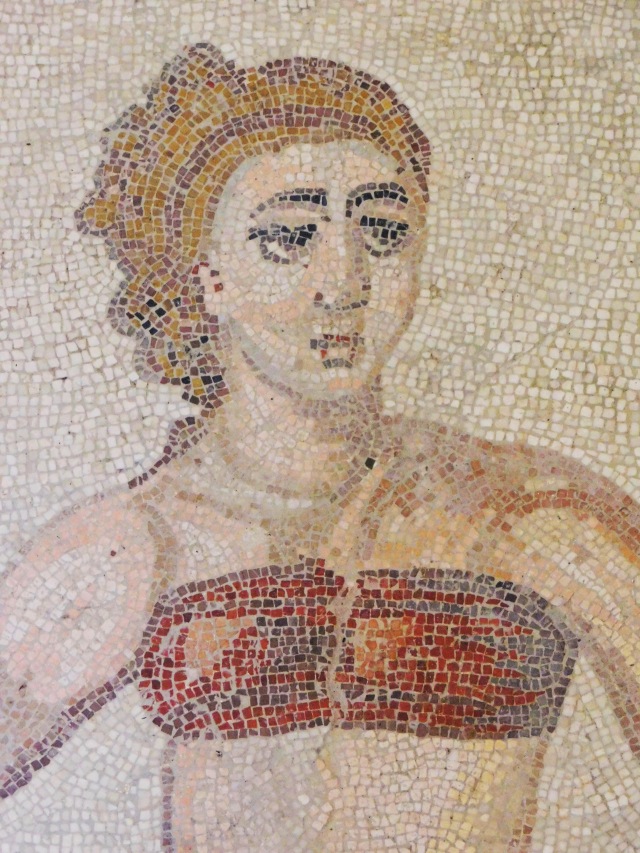 Close-up of the lovely lady holding the wheel in “Bikini Girls.” See the tiny shapes and gradations of color that create the room-sized scenes — much artistic talent required. 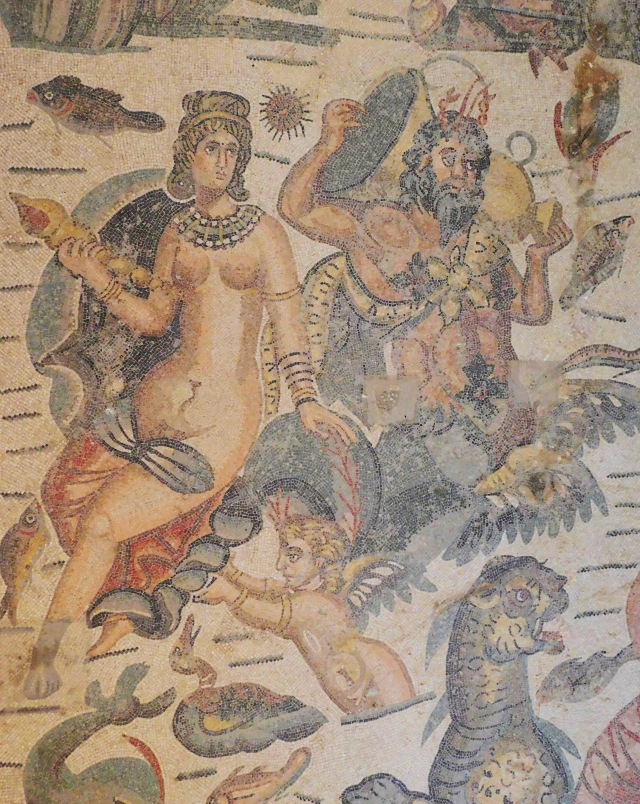 Detail from one of the massive living rooms, a sprawling mural depicting gods and goddesses surrounded by birds, sea creatures and oddly amphibious animals. 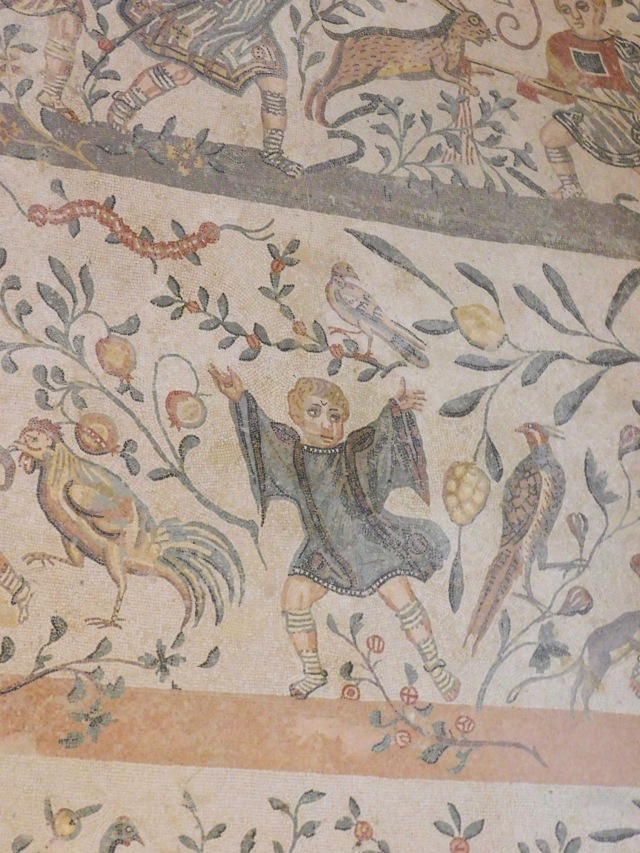 In the Cubicle of Child Hunters, the panel depicts the animals chasing the boys! 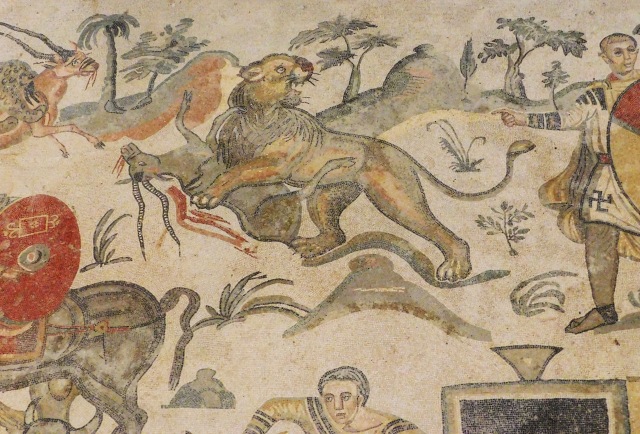 The Grand Hall of the Great Hunt — 180 feet long — depicts all phases of hunting. 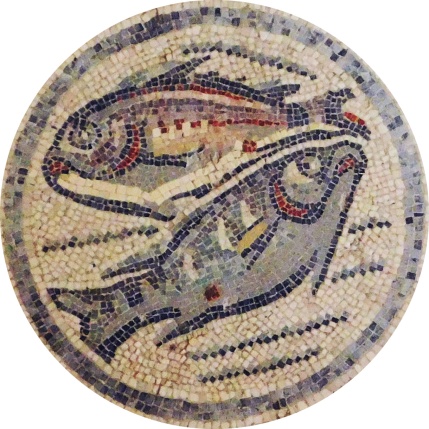 In the Hall of the Four Seasons you will meet these two sweet, swimmy fish.

The walkable columned portico has depictions of 162 animal heads, wild and domestic, surrounded by laurel crowns. I love this creature’s sassy, knowing expression. 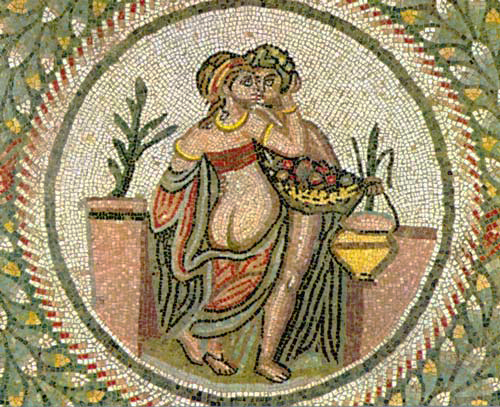 And amore, of course, is everywhere!

Villa Romana del Casale is an elaborate palatial villa where extensive excavations have revealed one of the richest, largest and varied collections of Roman mosaics in the world. The site is designated a UNESCO World Heritage Site. The villa and artwork date from the early 4th century AD. The mosaics are unique in their excellent state of preservation due to a landslide and floods that covered them for centuries.

Ms. Margolis-Pineo created EpicuriousTravelers.com to showcase her published work and ongoing food-travel adventures. Based in Portland, Maine, she travels frequently both in her home state and north to Montreal, her favorite North American city. Although she refuses to use the word "foodie," she has an abiding interest in food and wine. Ms. Margolis-Pineo's background as a designer gives her site an edge in the oversaturated blogosphere. New contacts, "likes," subscribers and content are always welcome!
View all posts by Epicurious Travelers →
This entry was posted in Art and Culture, International, Italian Travel, Off-the-beaten-track, Sicily and tagged Antiquities. Bookmark the permalink.