Posted on November 11, 2013 by Epicurious Travelers

Ah, Dublin. We arrive before breakfast and head to midtown by express bus. After a brief dash along the raw and blustery River Liffey, we arrive at the central Spire, a towering 400 ft. silvery needle. Toddling around with duffle bags gets old, fast, and we stop to recharge at Crema coffeeshop on Middle Abbey Street. Fully caffeinated, we wander to Trinity College, beautiful, and watch a bit of the Dublin marathon. 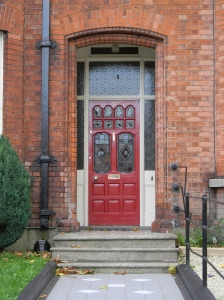 Dublin’s three-day “Rambler” bus pass is the ultimate bargain at 15 euro. We grab a classic double-decker to Upper Drumcondra and the ABC Guest House. The ABC feels like home with 16 tidy rooms and private baths. Pink roses on the marble mantel recall grandma, but the ABC is clean and modern. It isn’t soundproof, however — light sleepers may hear a stray cough or giggle. But Mary’s full-on Irish breakfast of eggs, sausage, bacon, tomato and beans can power the sleepiest guest through a busy day of toasting and touring.

We hit one of Dublin’s oldest pubs, O’Neill’s, for a pint and sandwich. Feeling squiffy, it’s a pale egg sandwich for me. Hubby has the “Special,” a grilled monster of ham, sausage, cheese and peppers, washed down with a pint of Smithwick’s  smooth red ale. We pass on the tour of the massive Guinness

brewery, Dublin’s hoppy Disneyland. Instead, we stop at The Ivy on Upper Drumcondra where savory beef pie comes with (you guessed it) a free pint of Guinness. We also enjoy the neighborhood Cat and Cage pub, where the internet password is “Dubliners.” We pop into the historically political Parnell Heritage pub for their traditional Irish stew made with Wicklow lamb and of course, Guinness. I cut the lovely fattiness with a guilty sauvignon blanc. Hubby gets a Galway Hooker, and everybody’s happy.

We make our way to the Irish Museum of Modern Art for an engaging retrospective of Irish modernist architect and designer, Eileen Gray. Her extraordinary furniture and Bauhaus-y architectural designs combine for a quirky and astonishing morning. Gray lived until the ripe old age of 98 as Ireland’s premiere designing woman. 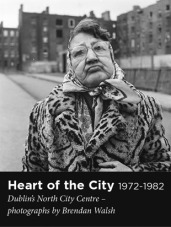 The Little Museum of Dublin houses vivid stories of this remarkable city told through thousands of historic objects and photographs. Lively exhibitions tell compelling and occasionally baffling tales from bicycles to beehive hairdos. 48 hours may not allow time for the museum’s special literary tour, which I was so sad to miss — a brilliant reason to return. 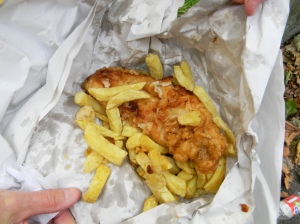 We end near Christchurch at Dublin’s oldest chip shop, Leo Burdock’s, for cod and chips with a generous sprinkle of malt vinegar and salt. It stays hot the short distance to St. Stephen’s Park wrapped in several layers of newspaper. How romantic! It’s enough for two – tasty and cheap at under 10 euro. Pigeons circle politely until you’re done.

This bus-able, walkable city of colorful doorways, quaint pubs, theaters and bookshops is steeped in literary history. Dublin is a writerly epicenter – think W.B. Yeats, Oscar Wilde, James Joyce, Samuel Beckett, Seamus Heaney. Literature is in Dublin’s very fabric, “in its conversation and cobblestones.” Few cities offer this kind of literary heritage — with the joy of language at its core.

After 48 hours,  we grab the #61 bus to the airport and are overjoyed not have to walk our bags any farther than the curb. • 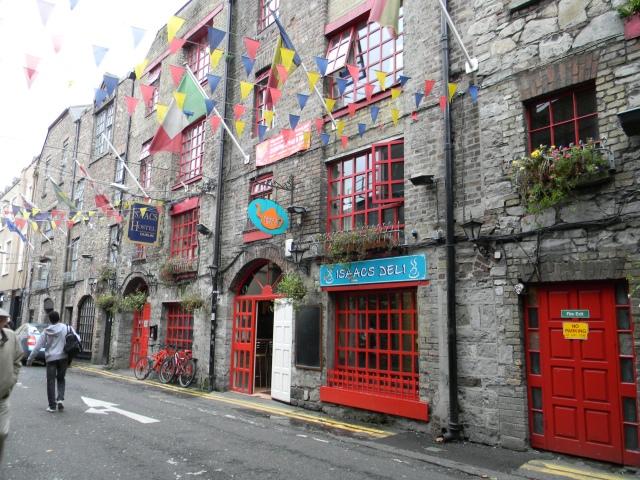 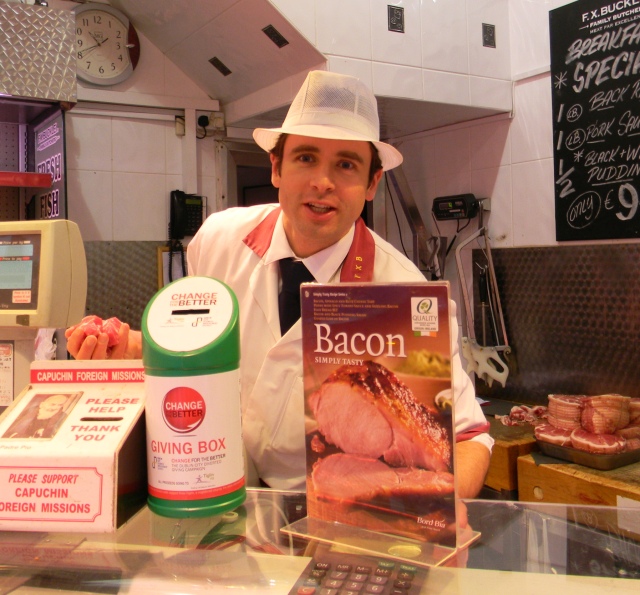 Ms. Margolis-Pineo created EpicuriousTravelers.com to showcase her published work and ongoing food-travel adventures. Based in Portland, Maine, she travels frequently both in her home state and north to Montreal, her favorite North American city. Although she refuses to use the word "foodie," she has an abiding interest in food and wine. Ms. Margolis-Pineo's background as a designer gives her site an edge in the oversaturated blogosphere. New contacts, "likes," subscribers and content are always welcome!
View all posts by Epicurious Travelers →
This entry was posted in Art and Culture, Dublin, International, Ireland, Theater, Travel and tagged Best pub food, Christchurch, Dublin, Dublin MoMA, Guinness, Ireland, Irish Museum of Modern Art, James Joyce, Leo Burdock's, Little Museum of Dublin, Oscar Wilde, River Liffey, Samuel Beckett, Seamus Heaney, Smithwick. Bookmark the permalink.